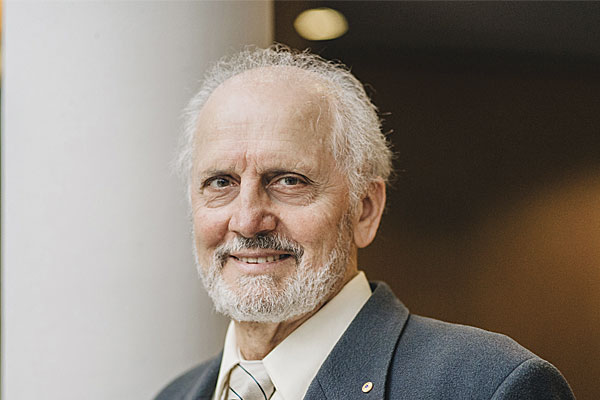 One of NeuRA’s most esteemed researchers and the most cited neuroscientist in the world, Scientia Professor George Paxinos AO, is taking his world- renowned brain atlases into a new dimension. Professor Paxinos is known for his work in defining the brain of not only humans but rodents, primates and even the chicken. These exhaustive definitions are collected together in an atlas each to their own, defining regions and tracts of the entire brain, allowing researchers to generate models of disease and analyse behaviour and enabling neurosurgeons to ensure the most accurate and precise incisions.

These atlases have, until now, been two-dimensional. Comprised of slices of the brain, layered on top of each other, they are defined by the staining of cells. This has led to the impressive discovery of over 1,000 new regions during the four decades since the inception of the first atlas. Professor Paxinos is pushing the boundaries even further with his latest project to construct a three-dimensional atlas of the living human brain and the human brainstem.

By using the most robust MRI technology available, Professor Paxinos is creating the most precise and accurate maps of the brain ever conceived.
“In human neuroscience, researchers and clinicians almost always investigate images obtained from living individuals. Yet, there is no satisfactory MRI atlas of the human brain in vivo or post-mortem. There are some population-based atlases, which valiantly solve a number of problems, but they fail to address major needs,” says Professor Paxinos. “Most problematically, they segment only a small number of brain structures, typically about 50, and hence are of limited value.”

Professor Paxinos aims to define approximately 800 structures in the human brain, and like all his previous atlases, hopes to provide a ‘gold standard’ for research and clinical practice.